In the current DevOps world, our industry relies on the ability to observe and monitorize our infrastructure and services. wgtwo is no exception here and as we are operating in the TelCo space we wanted to know more about the usage patterns of our platform over days, months and even years.

Internally we have been running Prometheus for a long time with a fairly limited retention of 30 days. This did not allow us to look far enough back in time to make the observations we wanted to. Luckily for us there already was a solution out there that would fill our needs and in addition to that make our monitoring stack more resilient. The solution is called Thanos.

Thanos was originally developed by a company called Improbable to provide long term storage for Prometheus. It evolved into a much more complicated component which wildly improved the scalability of the Prometheus monitoring Stack.

The basic functionality however is that Thanos will upload the metrics collected by Prometheus onto any service with a S3-compatible API or any other storage target supported by the Prometheus remote write feature. For readability we will only refer to it as S3 Storage as this is our storage target.

We shall briefly look at all those components before describing how we are leveraging Thanos to obtain a higher metric retention and higher reliability.

The Sidecar runs as the name suggests in the same pod as Prometheus and observes when Prometheus saves new storage buckets on disk, which it does about every 2 hours. If configured to do so, it will upload those storage bucket into S3. Another important feature is that it extends the Prometheus Pod with an API that can be used by Thanos Querier as a Store API endpoint to query Prometheus metrics.

Thanos Store implements the Thanos Store API and makes the metric data stored in the S3 bucket available to the Thanos Querier. To do that it observes the configured S3 Bucket and reads the metadata of the stored storage buckets available in S3.

Querier implements the Prometheus Query API and understands PromQL. It then sends the query using the aforementioned Store API to all known Thanos Stores (discovered using service discovery) and awaits the metric information from the stores, be it directly from Prometheus via the sidecar or metrics stored in S3 Object storage via Thanos Store.

It does not make a lot of sense to keep old metrics that are scraped every 15 or 30 seconds forever. At some point these metrics would no longer be useful to make sense of your metrics. This is where the Thanos Compactor comes in. It creates aggregates of old metrics based on rules. It will for example aggregate metrics that are older than 30 days into 5 minute chunks. This saves resources and still gives you almost the same accuracy when looking at longer timespans. After those metrics have been aggregated, they are written back into the S3 bucket and the metadata gets updated.

The Ruler component is the Thanos equivalent of Recording Rules. It can look at all Store APIs and generate new metrics according to the Recording Rules fed into the Ruler component. However since this rule processing is not done against a local datastore, it is possible that these new metric datapoints will not always be generated as it relies on a reliable data source to do this in the required intervals.

Architecture in a Cluster​ 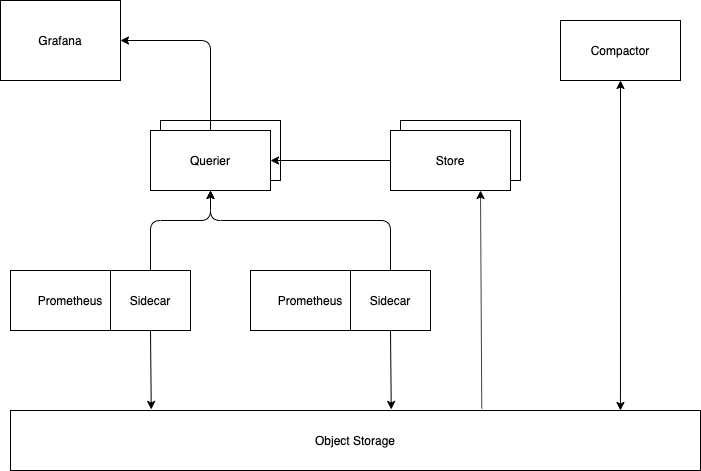 As we can see, there are quite a few things going on in this architectural view of the system, but on the other hand it is fairly simple to understand as the components are nicely decoupled from each other.

An interesting thing here is that the drawing has multiple Prometheus instances with multiple sidecars. Thanos actually allows for deduplication of timeseries data. The data uploaded from the sidecars contains information about which prometheus instance the metrics are generated from, and adds that. The Querier can then deduplicate this data so that the metrics shown in Grafana are consistent and do not come sometimes from Prometheus A and sometimes from Prometheus B.

This design also allows for an interesting other Use Case: querying multiple clusters. As long as the storage location used by the sidecars for uploading the metrics is identical, the time series data is available to the Thanos Store and therefor the Querier and Grafana. That even allows to run Grafana, Querier and Store in a completely different part of the world if need be.

What are the biggest benefits for us?​

As stated in the beginning of this article one of our objectives for implementing Thanos was the increased metric retention to be able to look back further in time.

The most interesting features for us are to be able to:

Even though Thanos comes with an increased architectural and operational complexity, we have to say after running it for a while, we think it is totally worth it. We can make architecture decisions by looking further back in time than before. It also has the additional advantage that a misconfiguration of a Prometheus deployment does not pull down the whole stack as Prometheus is HA and only updates one at a time. If the deployment fails, we can get notified and the deployment can be aborted. Also upgrades of the whole monitoring stack, can now be done gradually, which is also a great advantage for us!